This full-flavored cheddar cheese has a sweet, smokey smell reminiscent of an old-fashioned smoke house. The flavor is woodsy and rustic.

Pickup in store or nationwide shipping (varies by item)
Description

“Mild cheddar with a woodsy taste”

Cheddar cheese is aged from three months to three years with longer aging time producing sharper cheeses.  All of our cheddar cheese is packed by hand, taking forty pound blocks out of aging and cutting them into eight ounce bars.  Much time and attention is given to the cheese at this time.  We enjoy making homemade cheese balls and spreads with our cheddar cheese that is trimmed.  These trimmed “ends” are also available in our retail store at a discounted price.  Cheddar cheese then moves into the waxing area where every bar of cheese is coated in clear wax and then two coats of a colored wax.  Each colored wax identifies a different type of cheddar cheese.  The wax dries very quickly, the bars are labeled, and ready to go for sale.  Our Smoked Cheddar is waxed in a brown wax.

Most orders arrive between 3-6 business days, depending on processing time and destination. If you would like your order to arrive on a specific time frame, please make note of this in the comment section of your order.

Be the first to review “Smoked Cheddar” Cancel reply 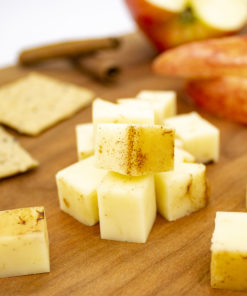 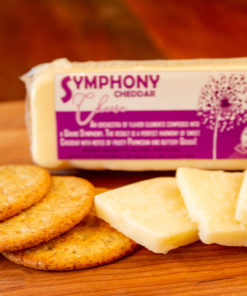